I was kind of intimidated … I’d only meet them very briefly prior to the show, so when they came on set that’s the first real time that we sat down to talk.
– Woolf, in a 2011 Screentalk interview, on talking to international stars on the show 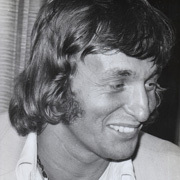 Music performed by Tony Baker and his Orchestra Singer Ricky May presents his own show Ray Woolf acted in this

Ray Woolf was part of the singing crew for this Ray Woolf played one of the Venture boat crew in this