Crush is a tale of simmering sexuality set in Rotorua. Moral or sexual ambiguity pervades the narrative of conflicted desire. Its mix of blocked-up writer, spurting mud-pools, infatuated teen, eel farm, American femme fatale (Marcia Gay Harden), noir motels, limp pongas and wheelchairs, plays out in a symbolic NZ landscape not seen before (or since). Director Alison Maclean's debut feature (which she co-wrote with Anne Kennedy) played in competition at the Cannes Film Festival.

Author Maurice Shadbolt went before the cameras to play father to the main character, in this adaptation of his acclaimed coming of age novel. Teen Nick (Paul O’Shea) is estranged from his family, and blaming himself for his Māori mate's climbing death. He runs away to his straight talking grandfather (Derek Hardwick) — who takes him bush — and loses his virginity to Sally (a first film role for Rebecca Gibney). Produced by Pacific Films legend John O’Shea, the NZ-German co-production was directed by Rolf Hädrich (Stop Train 349). The film debuted in NZ on television. In this 2013 short, a possum-trapping nature boy is challenged when a woman moves into a house on the edge of the bush, looking for a fresh start. Cinematographer Ginny Loane captures the wintry central plateau landscape where the fable of life and death plays out. Director Leo Woodhead co-wrote the script with Paul Stanley Ward; the result followed Woodhead’s short Cargo (2007) to the Venice Film Festival, and won the Jury Prize at the 2014 Hong Kong Film Festival. Director Andrew Adamson (Shrek) called it “a well structured, beautifully shot narrative.” Iaheto Ah Hi's play Tautai involved an urban car thief emulating his Tokelauan fishing ancestors — only instead of hunting sharks, he hunted cars. Twelve years and 27 drafts after first seeing the play, director Michael Bennett and co-writer Gavin Strawhan intertwined Tautai's story with seven other characters, each impacted by one moment of violence. Praising the "excellent ensemble" and Don McGlashan score, Herald reviewer Peter Calder argued that Matariki delivers "a touching series of intersecting stories about the fragility of life and the redeeming power of love". K' Rd Stories was a 2015 series of shorts celebrating one of Auckland’s most colourful strips. In this entry, Dan and Dwayne are “two lovable hustlers with an entrepreneurial spirit trying to scratch a living on the fringes of K Road”. $cratch documents the pair’s efforts to gain entry to the Las Vegas strip club, set up a pop-up tinny shop, and find a girlfriend (“a lot of girlfriends I had in the past gave me nothing but children!”). Dwayne is played by Dwayne Sisson, who co-starred with $cratch director Clint Rarm in Zoe McIntosh’s 2013 rogue-life tale The Deadly Ponies Gang. 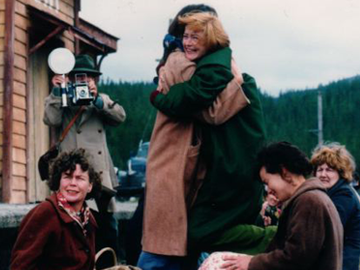