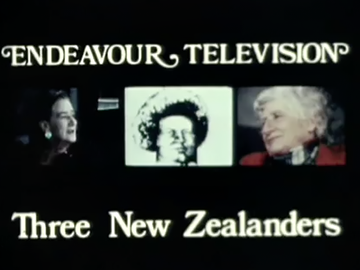 This three-part documentary series was made to mark International Women's Year in 1975; it  provides rare and precious interview footage with three of New Zealand's most celebrated writers; Sylvia-Ashton Warner, Janet Frame and Dame Ngaio Marsh; who each reflect on their life and philosophy. In the case of Ashton-Warner and Marsh, these documentaries were filmed in the last decade of their lives. Three New Zealanders was produced by John Barnett for Endeavour Films. Fish Out of Water manages to unfurl its light-hearted tale of young man and the sea, without a word of dialogue. Avoiding the morning traffic jams, our man (Nick Dunbar) finds peace by rowing each day to work in the city. But when a seductive blonde unexpectedly enters the picture, he finds his morning boat ride heading in unexpected directions. Directed by Lala Rolls (Land of My Ancestors), Fish Out of Water was invited to play in the 2005 NZ Film Festival, plus another 10 overseas fests. Victoria Kelly composes the brass and banjo-inflected soundtrack. Before turning to directing, Barry Barclay did more than five years training to become a priest. That experience surely percolates through his film Ashes, with its reflections on identity, spirituality and living (or feeling) apart from others. The film centres on the thoughts of four people: an artist, a woman struggling with her identity as a high achiever, an actor, and a priest. Are all of them acting, or only Sam Neill? The film features readings from Ash Wednesday, the poem written by TS Eliot after converting to anglicanism. Ashes screened on NZ television on 17 March 1975.

Auckland Museum's Volume exhibition told the story of Kiwi pop music. It's time to turn the speakers up to 11, for NZ On Screen's biggest collection yet. Turning Up the Volume showcases NZ music and musicians. Drill down into playlists of favourite artists and topics (look for the orange labels). Plus NZOS Content Director Kathryn Quirk on NZ music on screen. Director Vea Mafile'o's Tongan father Saia drives this deeply personal film. Vea raises thorny questions about the relationship between money and the church in Tongan culture, questions that caused her Kiwi/Tongan family pain. Pensioner Saia Mafile'o's dedication to raising large amounts of money for Misinale (an annual church celebration) upset his children and splintered his marriage. Mafile'o returns to Tonga with her father and siblings, to attend the Misinale and learn why the financial sacrifice matters to him. The documentary debuted at the 2019 Berlin Film Festival. Brothers Nigel and Jeremy Corbett were a musical comedy duo, before they joined comedy group Facial DBX (see this interview) and hosted stand-up comedy show A Bit After Ten. Jeremy has achieved further success as a comedian and broadcaster, and Nigel pursued a career in advertising.