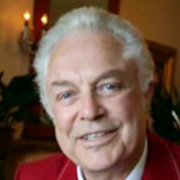 Max Cryer’s career as an entertainer encompassed singing on stage and screen, time in the United States, and pioneering live talk shows on television (Town Cryer). After a busy decade of TV presenting which began in the late 1960s, Cryer went behind the scenes to produce a clutch of quiz shows — before a late flowering as a prolific, bestselling author, exploring his love of words and Kiwi culture. He died on 25 August 2021.

The trouble with Max is that he can turn his hand to so many things, and accomplish them with flair and polish. And people tend to become confused by a man who moves with easy self-assurance through such a wide spectrum of entertainment. Writer Bute Hewes in The Listener, 8 June 1974, page 16