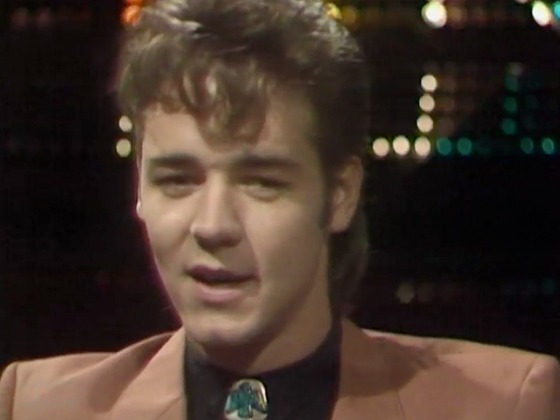 Excerpt one of three from this episode.

Excerpt two of three from this episode.

Excerpt three of three from this episode.

On this mid-80s youth music show, a fresh faced Russell Crowe is the star turn in his early persona as Russ le Roq (the name change to avoid comparisons with his famous cricketing cousins Martin and Jeff). With a hint of an Elvis sneer, Crowe performs 'What's The Difference' with his band Roman Antix, and is interviewed by presenter Phillipa Dann. Lounge jazz act Wentworth Brewster & Co and Hamilton funk rockers Echoes also feature; and Pat and Margaret Urlich from Peking Man talk about their latest single 'Room That Echoes' and its distinctive video.

It was done in a studio so, as far as choreography went, I didn’t actually make up a dance as such. I just sort of blatted around in that area.
– Margaret Urlich on Peking Man’s ‘Room That Echoes’ music video A fictional take on mid-80s music

Peking Man discuss this video in their interview