Three friends cruise inner-city Auckland in a 1946 Ford pickup, as they cope with the changing dynamic of their friendship and encroaching demands of the adult world. In the tradition of American Graffiti it captures the hope promised by a night on the town and a reality that struggles to meet expectations — punctuated by hoons, officious cops and dodgy tow truck operators. Queen Street is a fascinating look at Kiwi car and street culture in the pre-boyracer era, and a snapshot of a downtown that has changed markedly since 1981 when the film screened on TV. Like the digital ‘mash-up’ concept to come, this 1970 film uses content from more than one source to create something new. In this film collage, relics of visual and material culture from New Zealand museums are combined to evoke life in earlier eras. These objects — from moa skeletons, to scrimshaw, to a stereoscope, and surveys of Māori culture and sex appeal (!) — are mixed with historical footage (including turn of the century Queen Street) and a classical score. Another Time was directed by Arthur Everard for the National Film Unit. 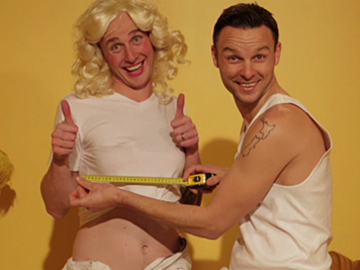 Combining sketches, pranks and parodies, Jono and Ben at Ten quickly gained popularity after it hit the airwaves in 2012. Critics praised the Jono Pryor (The Jono Project) and Ben Boyce (Pulp Sport) hosted series as one of the top shows that year. In this first episode, Pryor and Boyce hold their own Olympic Games, prank clothing store customers and get child versions of themselves to ask celebrities the hard questions. Meanwhile, comedian Guy Williams sings goodbye to rugby player Sonny Bill Williams at a press conference. The TV3 series was renamed Jono and Ben in 2015. In this second part of a documentary on Kiwis and cars, host Rita Te Wiata explores motoring in the latter half of the 20th Century. She begins in Christchurch where Ford V8s were a vehicle for post-war romance, then heads to Tahuna for beach racing. Te Wiata pockets the licence she supposedly got in part one and heads to Raglan to look at the car-enabled freedom of the 60s and 70s: surfing, fishing, caravans. While downsides are mentioned (motorways, pollution, accidents), mostly it’s a paean to petrolhead passion. The tour ends with a cruise up Queen St in a muscle car.